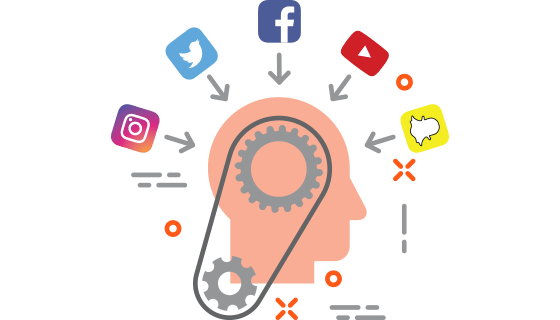 Why are teens spending so much time on Social Media?  Is it because Apps* are brilliantly designed and engaging, building community and bringing the world closer?  Or because brain hackers are hooking young users for salable personal data? (Hint: It’s both).

Countless teens have addictive relationships with Social Media Apps, and the consequences are multifold.  This is not accidental, as Apps are engineered to exploit neurochemistry.  By creating dopamine loops, they seek to own our central nervous systems.

A crop of industry insiders is publicly expressing remorse over what they helped create.  Former Facebook executives and developers describe how Apps are engineered to deliver small dopamine hits to users with the goal of motivating obsessive engagement.  Voicing concern about social costs of this practice, some seek to use the same tech to create more constructive software.

“…every time I check my phone, I’m playing the slot machine to see, ‘What did I get?’ This is one way to hijack people’s minds and create a habit, to form a habit.”  Tristan Harris (Former Google SW Philosopher)

All Social Media Apps target the same key area, the relationship between dopamine and opioid. “Our product is a slot machine that plays you,” boasts Ramsay Brown, co-founder of App optimization consultancy Dopamine Labs.  Dopamine Labs is straightforward about its objective- hacking our motivational system.  Dopamine and opioid complement one another, working together to ensure survival. Dopamine (wanting) arouses us to seek, and opioid (liking) delivers a pleasure payload upon satisfaction, then tells us to pause seeking.  Among its many other functions, dopamine motivates us to search for food and sex partners.  Opioid rewards us with pleasure and satisfaction while eating and mating, then tells us we may postpone our search for a while.

Arousal is pleasant in its own right.  When we’re frequently aroused but rarely and randomly satisfied we seek in perpetuity.  This is a dopamine loop.  Apps are engineered to create them.[1]

To keep users in ‘seek mode’, Apps must titillate, but rarely and unpredictably satisfy.  How do developers accomplish this? Features are meticulously designed to create and sustain arousal.  Methods for checking new messages are intentionally archaic.  Apps could deliver new message notifications without user input, but that wouldn’t advantage the rush one gets from anticipatory swiping motions.  Addictive Technologies expert Adam Alter likens this feature to playing slot machines.  “You pull the lever to win a prize…in the same way you refresh your Facebook updates to see if you’ve won.  Or you swipe right on Tinder to see if you’ve won.”

Dopamine loops are firmly tethered to validation loops, especially for adolescents. Acceptance and social reciprocity are powerful motivators at this stage of life, and designers exploit this expertly.  Snapchat is most notorious in this area, holding users’ attention by timing responses and sending recipients typing notifications that pressure rapid replies.  Facebook ‘likes’, brief snaps, tweets, texts, etc. keep teens glued to their devices.  Progressive amounts of in-App time are required to recapture the original buzz.

Adults are aware that Apps are free because data is being harvested.  They sense an ad economy at work.  Some contend that criticism is unwarranted, that companies are being attacked solely because they are successful. They make outstanding products.  People like to stay in touch.  Jobs and wealth are created, and persuasive design is critical in a highly competitive marketplace.

Critics point out that young users are Social Media’s primary targets, and they’re nominally aware of the consequences of their online activity. Many teens are ill-equipped to resist the temptation of posting personal information.  It’s difficult for them to disengage from Apps.  They’re prone to addictive and risky online behavior, and parental monitoring is complex and difficult for many.

User manipulation for political purposes is of concern as well.  Facebook and Twitter faced a PR crisis when the Cambridge Analytica story broke.  Here Facebook and Twitter data was illicitly scraped by a politically motivated firm with the goal of influencing an election.  They obtained data, analyzed it, then delivered provocative information to users targeted as ‘impressionable’ and living in key districts. Many find use of Social Media platforms and data for this type of persuasion worrisome.

Concerns about data use and design have triggered calls for industry controls by many insiders and end users.  Others are optimistic that the market will self-adjust, that companies will adapt as public opinion motivates adults to start forbidding access to their children or disengaging themselves.  Apple and Google responded in June of 2018 by releasing Apps purported to discourage smart phone overuse.  Facebook claims to have locked down vulnerabilities to safeguard against another incident like the Cambridge Analytica fiasco.

The benefits of Social Media are obvious. Its costs are rising.  Hopefully they’ll soon be mitigated, either by market forces, some forms of regulation, or a combination thereof. Whether or not this tech and its creators are making the world a better place is in the eye of the beholder.  The current trend is tending downward.

Finally, here’s a collection of interviews with Tristan Harris:

*App is used throughout as shorthand for Social Media Application(s).

[1] Dopamine/Opioid descriptions are a synthesis of various sources, including: