What AA Owes Their Early Atheist 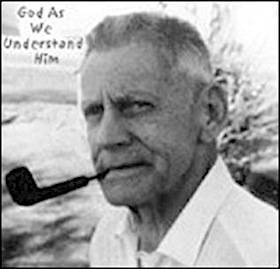 Such were the final concessions to those of little or no faith; this was the great contribution of our atheists and agnostics. They had widened our gateway so that all who suffer might pass through, regardless of their belief or lack of belief.
Bill Wilson, Alcoholics Anonymous Comes of Age (p. 167)

Alcoholics Anonymous owes a great deal to their pioneering agnostics and atheists, especially Jim Burwell.  In co-founder Bill Wilson’s own words, Jim and his pal Hank Parkhurst, leaders of early AA’s “radical contingent,” “widened our gateway so that all who suffer might pass through.” (ibid p. 167) Together, they leveraged crucial changes to the language of AA’s 12 Steps.  Jim’s singular personality was a catalyst for the adoption of AA’s 3rd Tradition.

How did these nonbelievers so influence the basic text for what was then an overtly religious organization? Tenacity and cohesion. They simply would not be dismissed during the editorial process. New York and Akron groups voted on alterations to mimeographed manuscripts for the upcoming book Alcoholics Anonymous in 1938-39. Jim and Hank took exception to Bill’s use of religious language.  They made a stand. “Burwell and Parkhurst [. . .] refused to sign on to the document. Since they constituted 20% of the group, Bill was forced to hear them out.” (Cheever, Susan. 2013, July 13. “The Angry Atheist Who Made AA Great.” Retrieved from https://www.thefix.com)

Heated discussions erupted, and members of New York and Akron groups split into factions.  Wilson described them as conservative, liberal, and radical. He added that conservatives wanted the book to be Christian in the doctrinal sense, while liberals, comfortable with the word “God”, were “dead set against any other theological proposition,” and atheists and agnostics “wanted the word God deleted entirely.” (AA Comes of Age pp. 162-163)

In the end, the “radical contingent” of atheists and agnostics prevailed in some vital areas. Changes to the final manuscript included replacement of “God” in AA’s 2nd Step with “Power Greater Than Ourselves,” insertion of the qualifier “As We Understood Him” after “God” in Steps 3 and 11, and removal of “On Our Knees” from Step 7. Also, a sentence was added before the introduction of the steps, which reads, “Here are the steps we took, which are suggested as a program of recovery” (emphasis mine). (Alcoholics Anonymous p. 56)

Though few in number, these changes had tremendous impact on the growth and durability of AA.  They provided a framework that accommodates believers of various faiths, including no faith, and altered the tone of the text from coercive and demanding to suggestive. As a result, AA was postured for remarkable growth and continued relevance over 7+ decades of social flux.

During Jim’s first attempt at sobriety he displayed an aggressive brand of non-conformity.  Several members were torn between disdain for the caustic atheist in their midst and their obligation to live up to the principle of inclusion. Members prayed for Jim’s failure and moved to ban him from AA.

Not a shy man, Jim pointed out a statement in the manuscript which read, “The only requirement for AA membership is an honest desire to stop drinking.” He asked the group, “When you guys wrote that sentence, did you mean it, or didn’t you?” (12 Steps and 12 Traditions p. 144) Acknowledging duplicity, the group embarked on a process of self-reflection.  Inclusion won out over pettiness, and the eventual result was codification of that statement as AA’s 3rd Tradition (sans the word honest).

It’s difficult to imagine AA flourishing without Jim’s influence. Most likely, its impact on alcoholics would’ve scarcely exceeded that of the Oxford Group from which it split, having pressured non-Christians and excluded non-believers. Today, Jim’s courageous role remains largely obscure, despite its impact being second in importance only to that of co-founders Bill Wilson and Dr. Bob Smith.  That’s unfortunate.

A widener of gateways, indeed.

Jim’s story appears in the “Personal Stories” section of the book Alcoholics Anonymous. It is called “The Vicious Cycle”. He is also featured in the book Twelve Steps and Twelve Traditions, “Tradition 3”, where he is referred to as “Ed”.  Jim founded the first AA group in Philadelphia in February 1940, co-founded Baltimore’s original group, and is AA’s initial unofficial archivist.

A condensed version of Jim’s story, in his own words, is featured in the May 1968 issue of AA’s Grapevine Magazine, titled “Sober for Thirty Years”.  It’s available as a download at aaagnostica.org: