The Original Man Behind Bill W.

Rogers Burnham, and a historical accounting of many Vermont influences upon the development of the Alcoholics Anonymous (AA) program. These themes are interconnected, beginning when Rogers met Bill “Bill W” Wilson when they were children living a few miles apart in Vermont during many summers, starting around 1910. They became close friends, and as teenagers, Rogers was rather persistent in telling his elder sister, Lois, to pay more attention to Bill. Eventually, she did, which led to their marriage and Rogers becoming a lifelong influence as a brother-in-law. 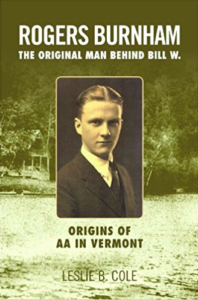